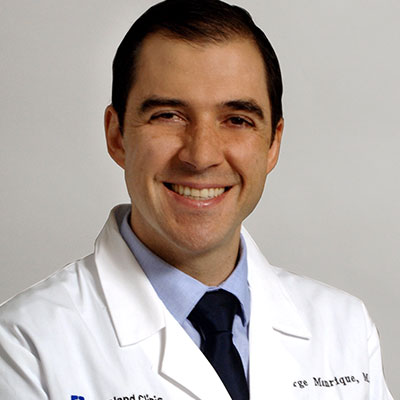 Jorge Manrique, MD, earned his medical degree from Pontificia Universidad Javeriana in Bogotá, Colombia. After completing medical school, he was appointed by the National Cancer Institute of Colombia to conduct several research projects. Following this appointment, Dr. Manrique, a passionate researcher, applied and was accepted into one of Colombia’s top orthopedic programs, where he completed his residency in orthopaedic surgery.

Dr. Manrique demonstrated a high interest in research in orthopedics and was subsequently appointed to one of the United States’ most important centers for joint replacements, the Rothman Institute at Thomas Jefferson University, in Philadelphia, Pennsylvania where he trained in total hip and knee replacement surgery. An avid academic physician, Dr. Manrique continued his training in Seattle at the University of Washington where he completed a fellowship in Orthopedic Oncology.

Dr. Manrique has conducted several clinical studies and participated in over 30 peer-reviewed publications. Moreover, he has authored several book chapters, which include updated concepts published by the American Academy of Orthopedic Surgeons (AAOS). Most recently he served as author and editor of the Second International Consensus Meeting in Musculoskeletal Infection.

Dr. Manrique is a board-certified physician and surgeon by the Colombian Society of General Surgery/Colombian Board of General Surgery, and the Colombian Society of Orthopaedics and Traumatology. He is also a member of American Academy of Orthopedic Surgeons, the American Association of Hip and Knee surgeons (AAHKS), The Musculoskeletal Tumor Society and the Musculoskeletal Infection Society.

Dr. Manrique specializes in orthopedic oncology and hip and knee arthroplasty surgery. His specialty interests also include complex tumor reconstruction and revision procedures including infections. He also has a special interest in direct anterior total hip arthroplasty including the conventional and bikini approach and has authored several publications on this topic.
He is currently the head of the Sarcoma program at Cleveland Clinic Florida.